Creamy Potato Soup cooks in the slow cooker all day and it's so easy to prepare! You don't need to peel and chop potatoes because this potato soup uses frozen hash brown potatoes. So creamy and delicious, and even better when it's topped with shredded cheese and bacon.

Be sure and try these other family favorite soup recipes like minestrone soup and this cream cheese chicken soup. 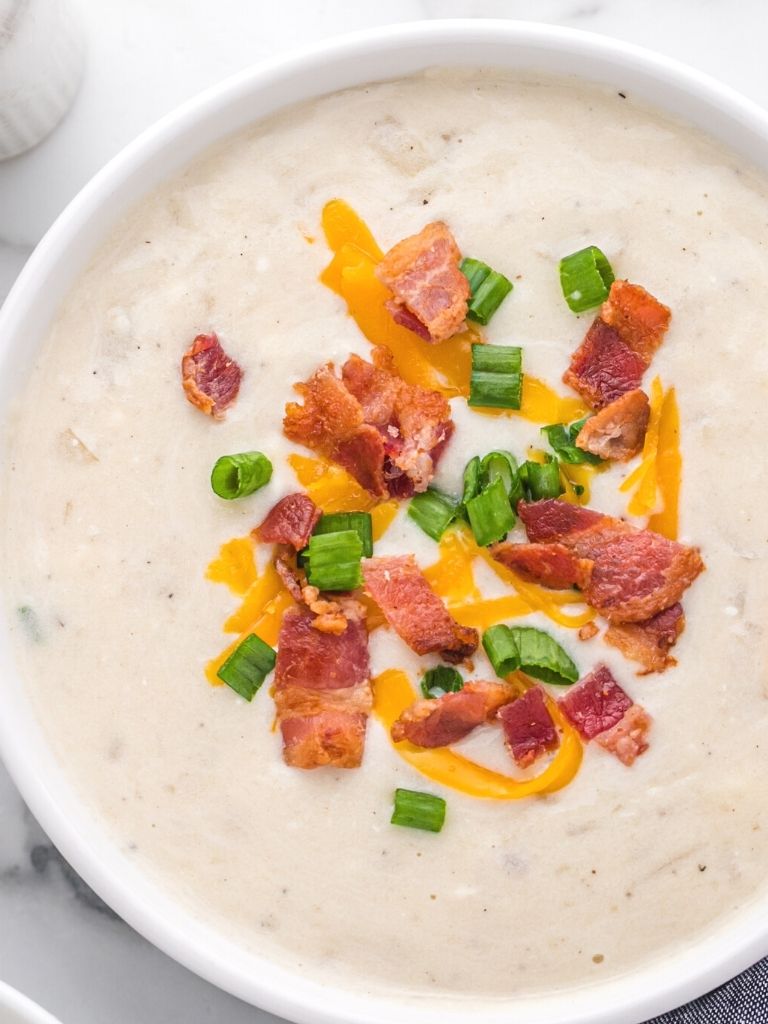 Creamy potato soup is one of my ultimate comfort foods. There is something so relaxing about a bowl of thick and creamy potato soup. It's probably because I grew up in Idaho and we loved potatoes growing up. Baked potato bar and potato soup with homemade bread almost every week.

I love this recipe because it cooks in the slow cooker all day and there is minimal prep work needed. The best part is that it uses frozen hash brown cubes so there is no need to peel and chop potatoes. 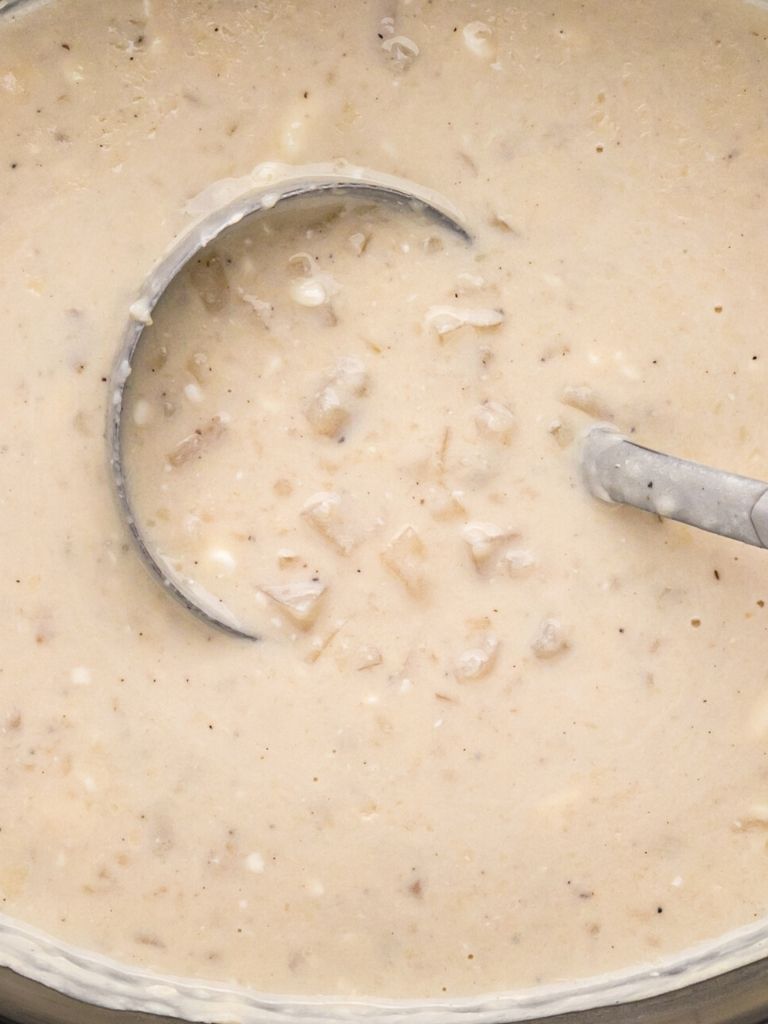 This recipe is simple to make with a couple prepared ingredients + some fresh stuff. 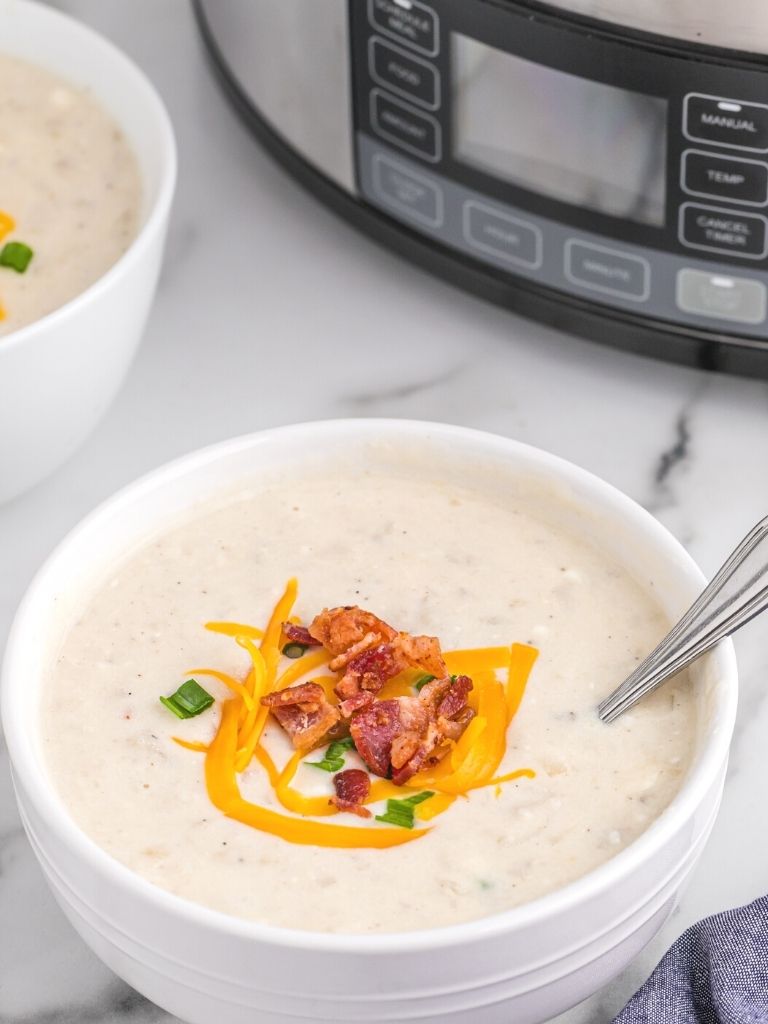 How To Make Creamy Potato Soup In The Slow Cooker

This recipe is a dump & go recipe that cooks all day in the slow cooker. Easy, 5 minute prep time is all you need and a slow cooker.

Step 1 : Finely chop the white onion and spray the insert of the slow cooker with cooking spray.

Step 2 : Add the frozen potato cubes, chicken broth, water, chopped onion, salt & pepper into the slow cooker. Stir and cover with the lid. Cook on LOW heat for 7 hours. I like to cook it for as long as possible because the potatoes are fall apart tender and soft.

Step 3 : Mix together the half & half milk + flour in a small bowl or glass measuring cup. Add it to the potato soup along with the softened cream cheese. Cover with the lid and let the soup cook for an additional 30 minutes or until the cream cheese is easily incorporated and melted into the soup. 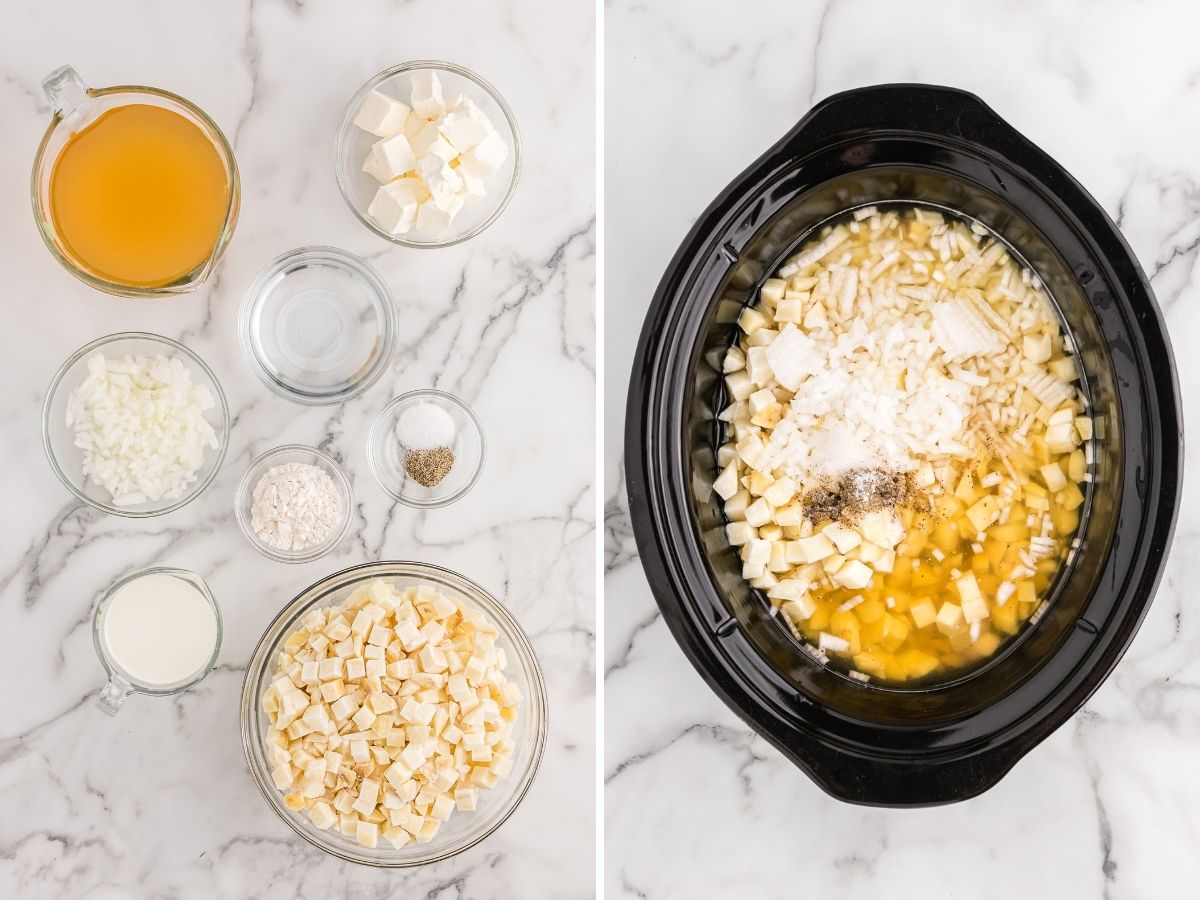 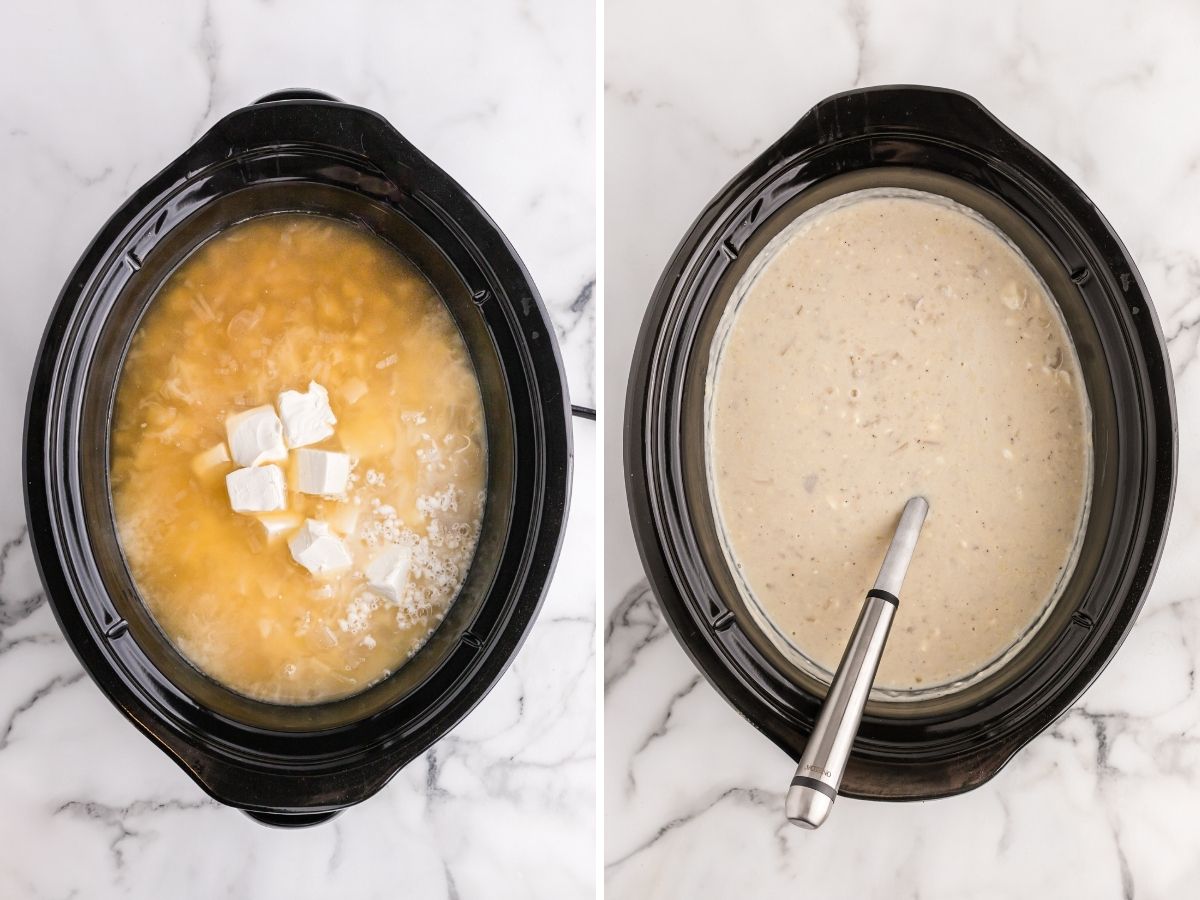 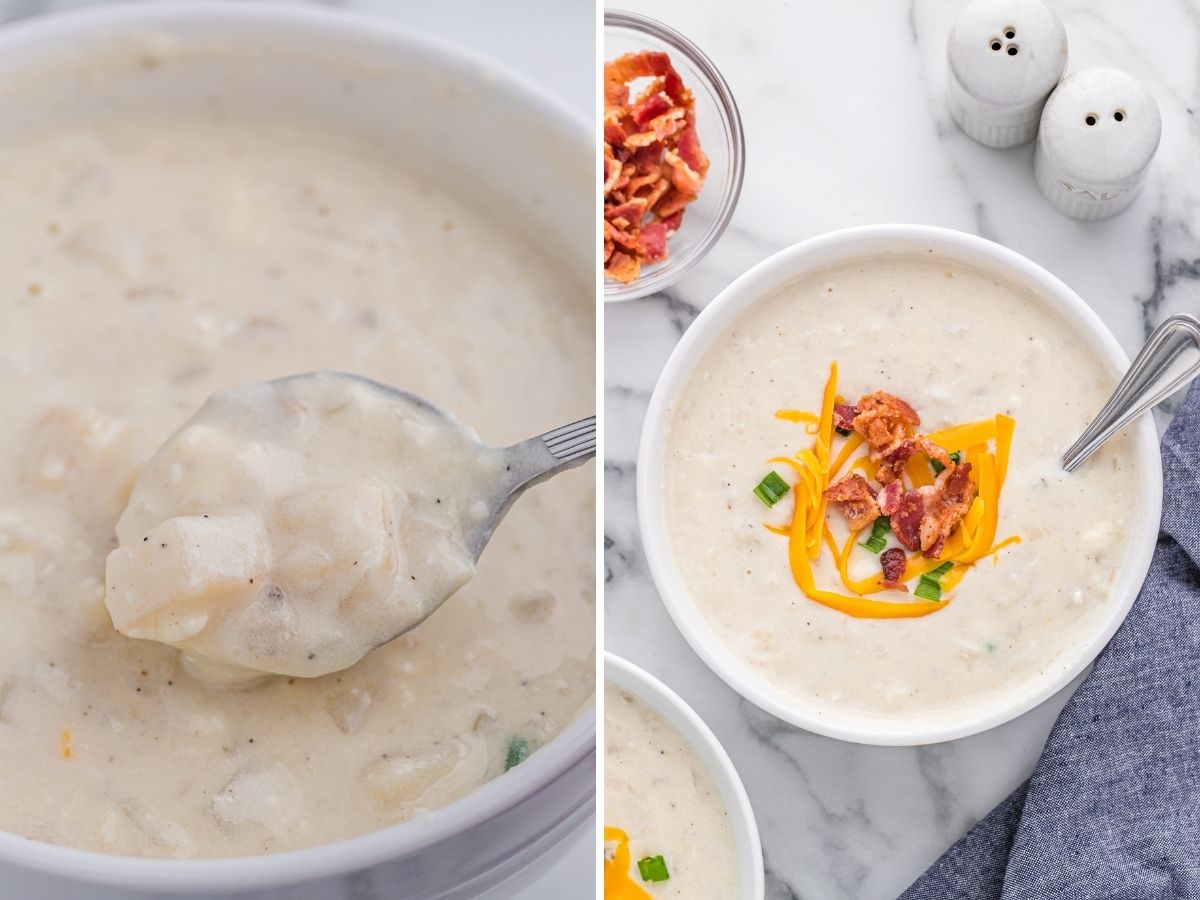 Here are a few of my helpful tips for this recipe.

There are a few changes you can make to this recipe if wanted. 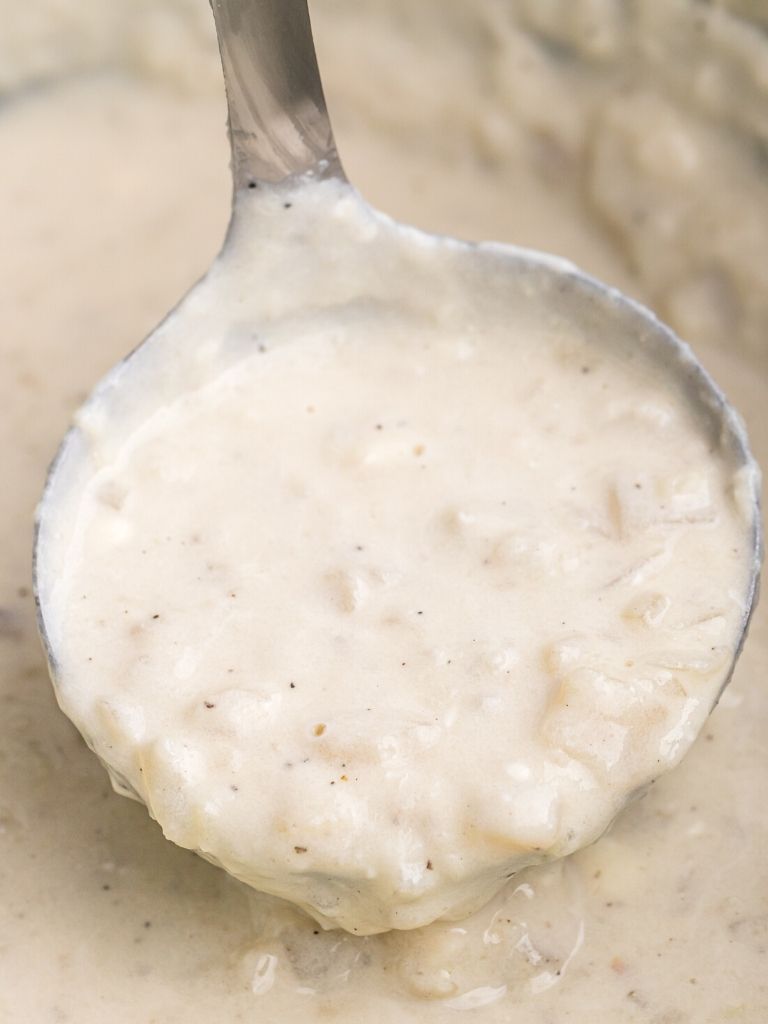 I love to serve this creamy potato soup with my buttery one hour rolls or inside some bread bowls. I normally buy some bread bowls at my local bakery or at the grocery store.

Topping this potato soup with chopped cooked bacon, shredded cheese, and green onions is a must.

You can also serve it with saltine crackers or Oyster crackers. 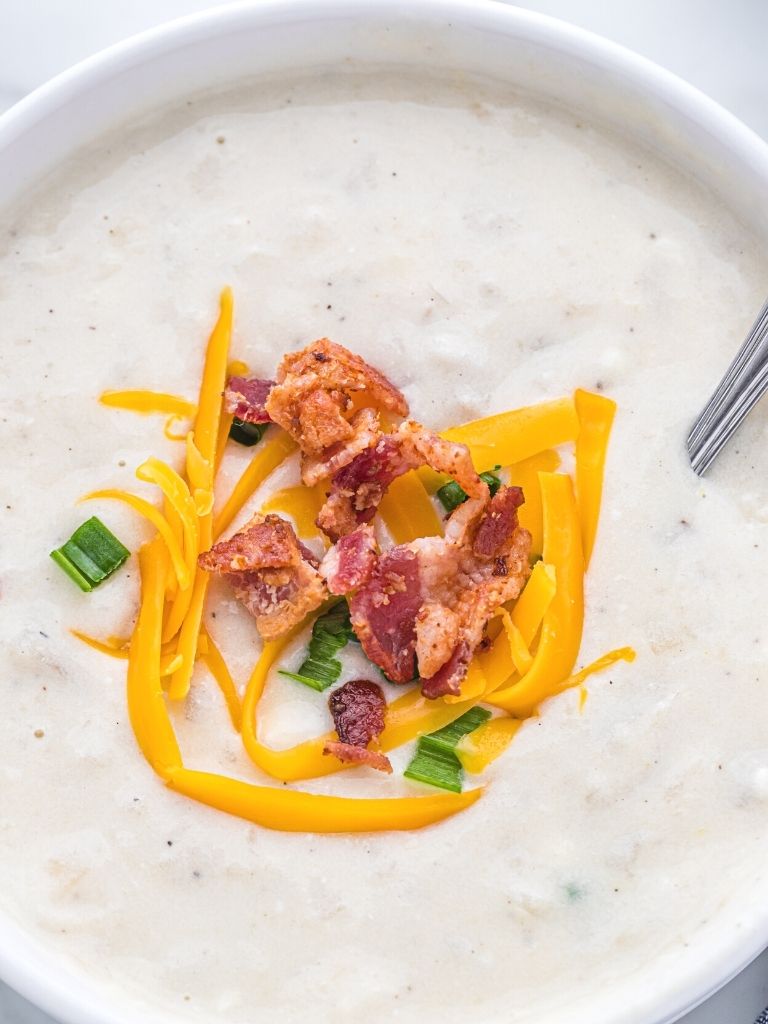 How To Store Leftovers

Leftovers of creamy potato soup will keep well, in an air-tight container, in the fridge for up to 5 days.

You can either reheat a serving in the microwave or inside a soup pot over the stove top. You may need to add additional water or chicken broth when reheating. It will thicken up as it sits in the fridge.

Can I Freeze Creamy Potato Soup?

My answer to this is yes and no. I don't freeze potato soup because of all the dairy in it. Dairy tends to curdle and separate once frozen and then thawed.

With that said, there are lots of people, who are better at freezing than I am, that freeze potato soup just fine. Be sure and add some additional water or chicken broth if needed when reheating the soup. You can throw the frozen soup into the slow cooker and let it cook and thaw that way or warm it up on the stove top.

Potato soup can freeze for up to 1 month in a freezer safe container or Ziploc bag. 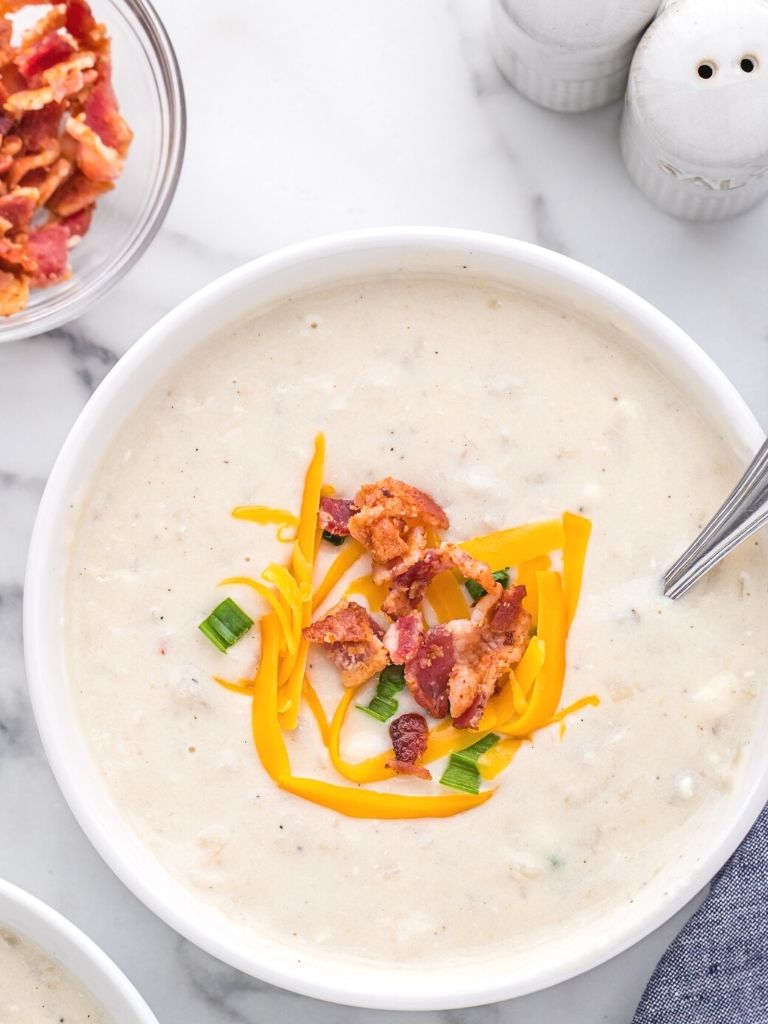 Here are a few supplies that you will need to make this recipe for creamy potato soup. These are an affiliate link, meaning that if you purchase, I will make a very small percentage from the sale. As always, I appreciate the support for the free recipes I post ? I only will recommend things that I personally own and love! Promise.

Slow Cooker : I have a few different slow cookers and this is one of them. It's large enough for any crock pot recipe and it works well. 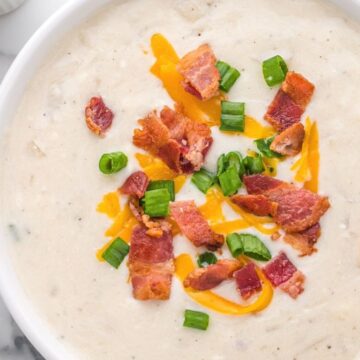 Jessica
Creamy Potato Soup cooks in the slow cooker all day and it's so easy to prepare! You don't need to peel and chop potatoes because this potato soup uses frozen hash brown potatoes. So creamy and delicious, and even better when it's topped with shredded cheese and bacon.
4.80 from 5 votes
Print Recipe Pin Recipe
Prep Time 5 mins
Cook Time 7 hrs
Total Time 7 hrs 5 mins
Course Soup
Servings 8
Calories 228 kcal

Serving Tip : This soup does really well on the 'warm' setting of the slow cooker. Simply add the milk + flour and cream cheese and let it cook until smooth. Then turn the slow cooker to warm for up to 2 hours until you're ready to eat.  Chicken Broth : You can use a 32 oz container of chicken broth or 4 cups of water + bouillon. Be sure and use full salt chicken broth for the best flavor. The slow cooker tends to mute flavors so you want that salt to hold up to the cook time.  Make It Spicy! : Add some cayenne red pepper, red pepper flakes, or hot sauce into the slow cooker. You can also top the serving of soup with shredded pepper jack cheese.  Cream Cheese : Make sure this is very soft to avoid lumps in the soup. I place the cream cheese in the microwave for 30-45 seconds before I add it into the slow cooker.  Tip : Because of the long cook time the potatoes get really soft and tender. To the point that as you stir it, the potatoes will naturally fall apart or there may be some soft chunks of potatoes. Don't use an immersion blender or transfer the soup to a blender to get it perfectly smooth. Doing this will cause the potatoes to turn gummy and starchy. Just gently stir the potato soup once it's all done cooking and the milk and cream cheese has been added.  Nutrition Information : Information is for one serving of the potato soup and does not include any additional toppings. One serving is equal to about 1.25 cups of soup. 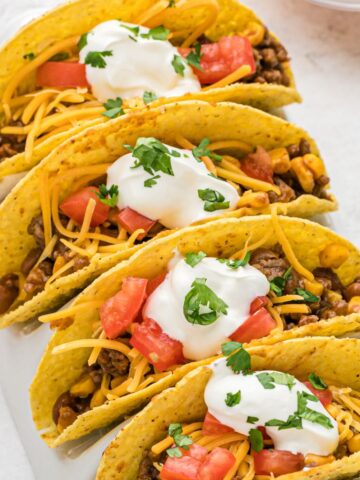 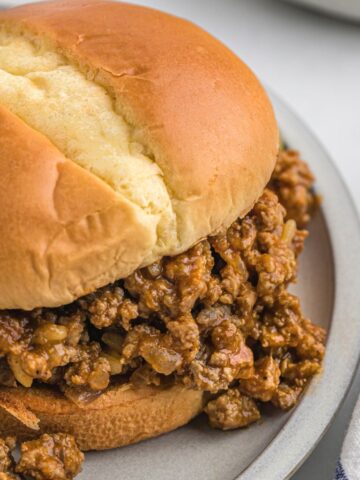 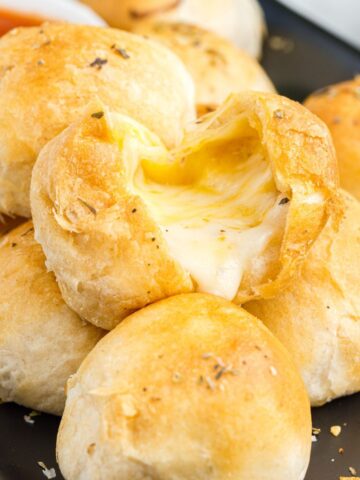 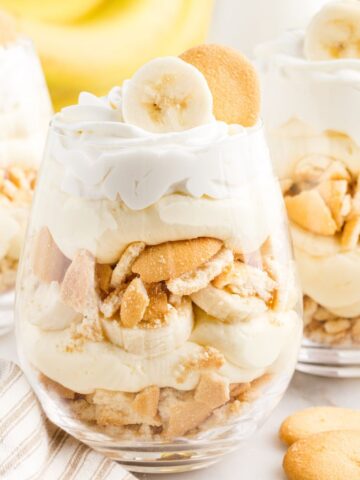 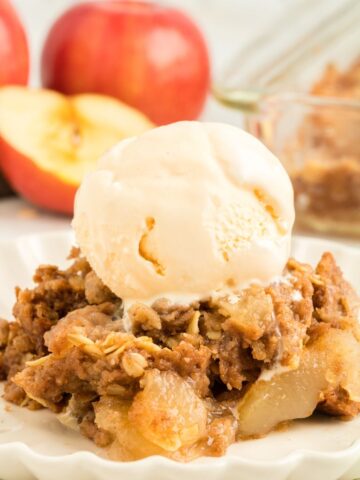 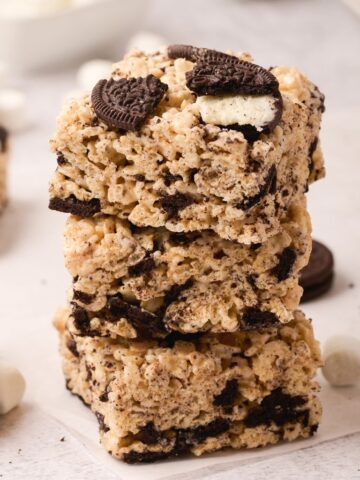